The dullest book in history

The dullest book in history

My friend Jacinto is writing a book. Actually, he’s been writing it for years. Well over a decade in fact. He always says that it’s going to be a long book: “Dumas’ novels will look like booklets next to it!”, he says with enthusiasm. Every time I see him he shares with a smile the last  word count: “eight hundred ninety-eight thousand four hundred and twenty-five, close to the million Antonio!” He says it with the joy and pride of the banker who, in a fancy restaurant, speaks of the millions in his investment trust fund, even though he doesn’t own them.

The thing is, the book is about the life of an overwhelmingly boring man.

Jacinto is a well versed man, something of an erudite. Before he started writing this book, which now takes up all of his time and mental space, he was a tireless reader. He always was a fervent admirer of the pure poetry of Juan Ramón Jiménez: “It’s just as Hegel said, in the form lays the meaning, no room for distinction my friend, say what is as is!” That enthusiasm he had when talking about poetry and philosophy he lost gradually as he went deeper and deeper into the arduous task of writing that novel. Jacinto was way too honest and coherent a man to betray such  a crucial aesthetic concept: “it’d be like backstabbing what I hold dearest”. Therefore, the book is, necessarily, horribly boring. Some paragraphs are in the thousands of words. Sentences are  endlessly subordinated though they barely  bare any content in them. Words follow each other like the steps of a tired and thirsty man wondering through a steppe without direction.

Jacinto always was very keen on cinema and especially actors. Amongst actors he felt an almost equal fascination towards method actors as he did for Juan Ramón: “be whom you need to be, do not pretend, great actors don’t act, they simply are”. That was another of his mottos. He’s great idea, the one that was going to create a change of paradigm within the history of literature, was precisely that. Superimpose Daniel Day Lewis to Hegel and Juan Ramón Jiménez. “I can’t stand writers who write about things they don’t know, fantasy is wretched, write about what you know or don’t write at all!”, he used to say vehemently.

Before he started to write his novel he changed all his live habits. He quit reading, and writing, and listening to music, he quit going out, he even quit his girlfriend. He wanted to learn about things he’d never been interested on, such as cleaning products, finance or football. But soon he began to find them interesting, so he had to quit them too. He then decided on a more frivolous approach. He started learning about fashion and watching tv programas about gossip and celebrities. However, soon he found them interesting too. One Thursday morning he surprised himself terribly excited about the new issue of Hello magazine, he wanted to know how the Dukes of Essex were doing in their new life in Canada. The moment he felt empathy for poor Meghan and how the unscrupulous tabloids where treating her, he realised he must quit that too.

He had to refrain from any form of interest, something rather difficult given Jacinto’s inquisitive and curious nature. Nevertheless, with great perseverance and effort he manage to live an utterly boring life. A life devoid of any interest whatsoever. He felt ready to get to work and so he did. From then on, month after month, year after year, Jacinto seem to vanish. The only thing that would make him smile was the word count. And if it did, it wasn’t due to a sense of being closer to his goal but for a purely quantitative reason. The only thing he had left in him was the satisfaction that he was being true to his ideas and the occasional certainty that he was writing the dullest book in history.

Jacinto is moved by a ferocious determination: his book must be so boring, so painfully tedious, that absolutely nobody will be able to finish it. All would be in vain if just one person managed to read it through to the end. In order to do so he can’t just make it completely uninteresting, but it must also be so thick that it intimidates even the most avid of readers when they see it in the bookshops. He wants to publish it in very fine print, with abundant foot notes and in a paper as thin as bible paper if not thinner. And even then it must still be the thickest book in the bookshop.

I’m worried about my friend jacinto. His days follow each other like the words in his book, without direction or interest. At the beginning he complained about having to write such a boring novel. Each page was like a painful birth. Now he just lives for the word count at the bottom of his screen. It’s his only source of satisfaction. His only purpose. Thirteen million six hundred and forty-eight thousand three hundred and seventy-nine words.

I’m worried about my friend Jacinto.

A half moon in Lamu 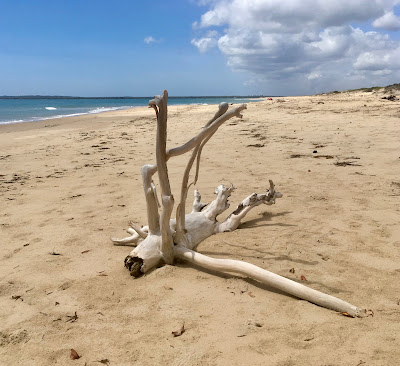 A half moon in Lamu

The hot sun climbs fast
From darker blue to lighter blue
And the darkness suddenly dissipates;

Water in
Water out

The wind blows incessantly
Not too slow, not too fast
Sufficient to undress you;

Water comes in
Water goes out

The stars so plentiful,
So tiny yet so big,
So far away and so bright,
They will make you feel small,
And not one, not two,
But three whole galaxies
Making you face your own insignificance;

Until for one night only,
One out of twenty-eight,
The Moon and the Sun
Meet,
melt,
unite,
Day and night,
Silver and gold;

Then the horizon:
Finer line amongst vastest blues,
Spirit, earth, water, fire, air,
Big mouth that swallows
The sun, the moon, the stars, the self;

Water comes in
Water goes out

Until finally you are washed away to the shore,
A long forgotten plastic biro
With nothing left to say,
With nothing left to learn
A plastic top with no more water to hold,
With no message to contain,
With no bottle to cap,
A beautiful smooth old piece of driftwood,
From some distant lush shore,
Bare, naked, exposed,
Half buried in the sand,
Under the fearsome Lamu Sun.

Water in
Water out.

Hugging the full moon of your womb


Hugging the full moon of your womb
I feel all the miracle of life
concentrated in your perfect roundness,
all the power of spring
contained in perfect curve.
I feel how you cease to be just you
to become the crucible of everything
that was, is and will be.
And I understand in brief circular eternity
that out of all possible truths that were
none was so pure,
nor so mysterious,
nor so detached from time,
as the voluptuous Truth
that sprouts in the core of your being,
fruit of that fleeting moment
in which I was you, and you were I.

As I hug the full moon of your womb
I glimpse the Truth of the sun
rising in the horizon that joins us.